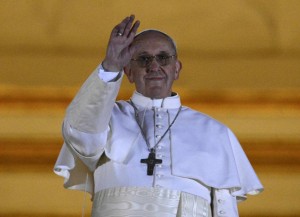 Newly elected Pope Francis, Cardinal Jorge Mario Bergoglio of Argentina appears on the balcony of St. Peter’s Basilica after being elected by the conclave of cardinals, at the Vatican, March 13, 2013. White smoke rose from the Sistine Chapel chimney and the bells of St. Peter’s Basilica rang out on Wednesday, signaling that Roman Catholic cardinals had elected a pope to succeed Benedict XVI. REUTERS/Dylan Martinez (VATICAN – Tags: RELIGION POLITICS)

There is no more story.

This is the most recent story.